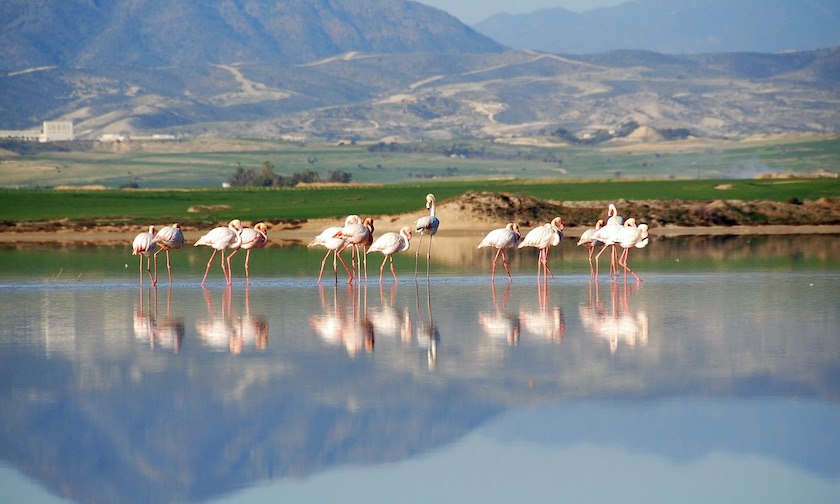 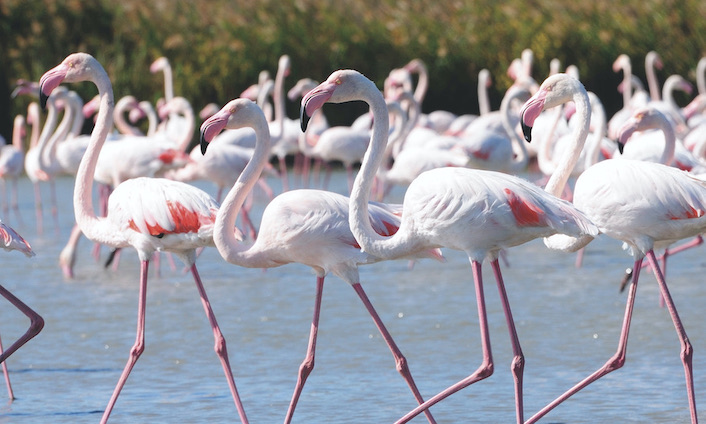 Most famous for the flocks of thousands of vivid Greater Flamingos that frequent the lake during the winter season, Larnaka Salt Lake is actually a complex of four salt lakes, covering a surface area of 2.2 sq km. The main lake with its winding nature path and bird watch tower is known as 'Aliki'. This larger lake is then followed by lakes Orphani, Soros and Airport, stretching all the way to Pervolia, Meneou and Dromolaxia villages.

The dark red algae which grows in the Salt Lake is the basis of the food chain, as the small shrimp in the lake feed on it. In turn, this shrimp is food not only for the flamingos, but also other migratory birds, which total more than 85 species. The inflow of fresh water in the Salt Lake is necessary as it maintains the ecological balance of the wetland.

Discover more via our Larnaka: A Birdwatching Haven video.

The 4km trail at the Salt Lake has two main starting points; the first at the Kamares Aqueduct, and the second at the salt collection plateau (on Artemis Avenue towards the old airport, 150 metres after the District Judicial Court). Aside from the majestic migratory birds and the interesting plant life of the area, the Goddesses Artemis-Diana and Aphrodite-Astarte were worshiped at the site. A sanctuary, which no longer survives, existed in this area, and an elegant sculpture of Artemis - Diana was discovered here, with a copy now adorning the roundabout on Artemis Avenue. The close connection of the area with these Greek, Semetic and Roman Goddesses is mirrored in the ultra-red sunsets that can be enjoyed on the trail. This trail is also part of the European Walking Route E4.